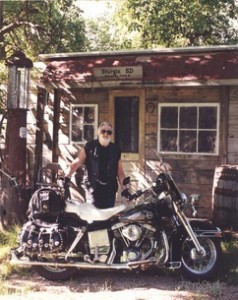 A respected motorcyclists rights activist and leader, Ed Netterberg dedicated his life to the preservation of freedom. Born in Montana, Ed moved to South Dakota in 1967. His love of motorcycling led him to A.B.A.T.E of South Dakota. He served as Vice-President and then President of the Black Hills Chapter of A.B.A.T.E. Next he was elected State Coordinator, a position he served in for seven years.

At one point when A.B.A.T.E. of South Dakota was close to financial ruin, Ed put up his motorcycle as collateral. His sacrifices, accompanied by his leadership and dedication, turned the organization around.

One of Ed’s most significant accomplishments while working for A.B.A.T.E. was serving as their lobbyist. Ed spent legislative sessions at the state capitol tackling such issues as freedom of choice, the social burden theory and discrimination. He used all of his education and passion to secure the liberty of motorcyclists living in and visiting the great state of South Dakota.
Some of his lobbying activities include:
Lead the battles defeating helmet and seat belt laws.
Increased funding for motorcycle safety and education with increased licensing fees.
Instrumental in getting the law changed regarding motorcycle handlebar height from “a depressed seat” to “shoulder height”.
Worked closely with Department of Transportation in successful introduction of handicapped motorcycle license plates.
For years it was against the law to carry a concealed weapon on a motorcycle even with a South Dakota concealed weapons permit. Ed successfully lobbied to change this law. A South Dakota resident with a concealed weapon permit
may now carry their weapon on their motorcycle.

Was instrumental in the Governor declaring May as Motorcycle Safety and Awareness month for the first time in South Dakota. He pursued getting the official declaration for many years.
Worked closely with Department of Transportation in establishing new procedures for taking the motorcycle rider test to be licensed to operate a motorcycle. Changed from riding through cones to a street test with the examiner in a vehicle following the motorcyclist, instructions are given through a headset, making the motorcycle test similar to the driving test for other vehicles).

He was a certified motorcycle safety instructor and believed strongly in rider education. He was a long time member of countless states rights organizations across the country and was involved in the early years when the Motorcycle Riders Foundation was created. Ed served as Director for the National Motorcycle Museum and Hall of Fame until August 1998.

He was inducted into the Sturgis Motorcycle Museum Hall of Fame, in the Freedom Fighter catagory.